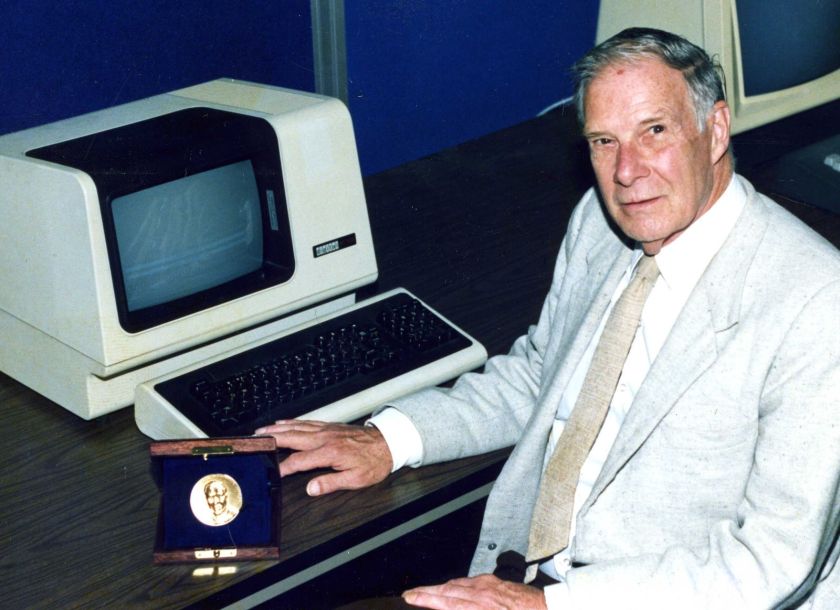 Full transcript of “You and Your Research” here.

Richard Hamming is most famous for Hamming code used heavily in information theory and working on the Manhattan Project.

I read this transcript whenever I start a new job, new role, or whenever I am feeling burnt out or otherwise unmotivated. The transcript is from a seminar he gave that answers the question, “Why do so few scientists make significant contributions and so many are forgotten in the long run?”.

Hamming’s perspective is unique in that he has rubbed shoulders with many of the modern era’s mathematical and scientific greats, many of whom have theorems or methods named after them. Hamming, famous in mathematics and computer science for “Hamming Distance” and “Hamming code”, pointed his sharp and analytical mind at his illustrious peers and did us and the whole world a favor by doing a brain dump on his powerful insights.

I highly encourage reading through the whole transcript linked above but I’ve also highlighted the points that most resonated with me:

From the get go, let’s throw luck out of the window.

Let me start not logically, but psychologically. I find that the major objection is that people think great science is done by luck. It’s all a matter of luck. Well, consider Einstein. Note how many different things he did that were good. Was it all luck? Wasn’t it a little too repetitive? Consider Shannon. He didn’t do just information theory. Several years before, he did some other good things and some which are still locked up in the security of cryptography. He did many good things.

You see again and again, that it is more than one thing from a good person. Once in a while a person does only one thing in his whole life, and we’ll talk about that later, but a lot of times there is repetition. I claim that luck will not cover everything. And I will cite Pasteur who said, “Luck favors the prepared mind.” And I think that says it the way I believe it. There is indeed an element of luck, and no, there isn’t. The prepared mind sooner or later finds something important and does it. So yes, it is luck. The particular thing you do is luck, but that you do something is not.

Courage is an important piece of the puzzle.

One of the characteristics of successful scientists is having courage. Once you get your courage up and believe that you can do important problems, then you can. If you think you can’t, almost surely you are not going to. Courage is one of the things that Shannon had supremely. You have only to think of his major theorem. He wants to create a method of coding, but he doesn’t know what to do so he makes a random code. Then he is stuck. And then he asks the impossible question, “What would the average random code do?” He then proves that the average code is arbitrarily good, and that therefore there must be at least one good code. Who but a man of infinite courage could have dared to think those thoughts? That is the characteristic of great scientists; they have courage. They will go forward under incredible circumstances; they think and continue to think.

Hard AND intelligently applied work is the key. Not one or the other. I understand this to mean we should spend significant time in optimizing our learning and working processes.

What Bode was saying was this: “Knowledge and productivity are like compound interest.” Given two people of approximately the same ability and one person who works ten percent more than the other, the latter will more than twice outproduce the former. The more you know, the more you learn; the more you learn, the more you can do; the more you can do, the more the opportunity – it is very much like compound interest. I don’t want to give you a rate, but it is a very high rate. Given two people with exactly the same ability, the one person who manages day in and day out to get in one more hour of thinking will be tremendously more productive over a lifetime. I took Bode’s remark to heart; I spent a good deal more of my time for some years trying to work a bit harder and I found, in fact, I could get more work done.

On this matter of drive Edison says, “Genius is 99% perspiration and 1% inspiration.” He may have been exaggerating, but the idea is that solid work, steadily applied, gets you surprisingly far. The steady application of effort with a little bit more work, intelligently applied is what does it. That’s the trouble; drive, misapplied, doesn’t get you anywhere. I’ve often wondered why so many of my good friends at Bell Labs who worked as hard or harder than I did, didn’t have so much to show for it. The misapplication of effort is a very serious matter. Just hard work is not enough – it must be applied sensibly.

Also, some level of sacrifice needs to be made…

I don’t like to say it in front of my wife, but I did sort of neglect her sometimes; I needed to study. You have to neglect things if you intend to get what you want done. There’s no question about this.

Gravitate toward the hardest, biggest, problems.

If you do not work on an important problem, it’s unlikely you’ll do important work. It’s perfectly obvious.

An unchecked ego has harmful consequences.

You find this happening again and again; good scientists will fight the system rather than learn to work with the system and take advantage of all the system has to offer.

“The appearance of conforming gets you a long way.” If you chose to assert your ego in any number of ways, “I am going to do it my way,” you pay a small steady price throughout the whole of your professional career. And this, over a whole lifetime, adds up to an enormous amount of needless trouble.

Be honest with yourself in your failures.

Now self-delusion in humans is very, very common. There are enumerable ways of you changing a thing and kidding yourself and making it look some other way. When you ask, “Why didn’t you do such and such,” the person has a thousand alibis. If you look at the history of science, usually these days there are 10 people right there ready, and we pay off for the person who is there first. The other nine fellows say, “Well, I had the idea but I didn’t do it and so on and so on.” There are so many alibis. Why weren’t you first? Why didn’t you do it right? Don’t try an alibi. Don’t try and kid yourself. You can tell other people all the alibis you want. I don’t mind. But to yourself try to be honest.

And more practically, when doing presenations spend a significant amount of time practicing.

I believed, in my early days, that you should spend at least as much time in the polish and presentation as you did in the original research. Now at least 50% of the time must go for the presentation. It’s a big, big number.

And the summary from the man himself:

In summary, I claim that some of the reasons why so many people who have greatness within their grasp don’t succeed are: they don’t work on important problems, they don’t become emotionally involved, they don’t try and change what is difficult to some other situation which is easily done but is still important, and they keep giving themselves alibis why they don’t. They keep saying that it is a matter of luck. I’ve told you how easy it is; furthermore I’ve told you how to reform. Therefore, go forth and become great scientists!